My father was never one to send cards, flowers, or gifts. He wasn’t one to call either. Of course, he didn’t have a phone for many years (but that’s another story). For Christmas or birthdays, he would usually show up with a brown paper bag with a toy or two in it. My parents divorced when I was four so I don’t have any memories of him being home with us. What I do recall is the rush of adrenaline on Sunday mornings when we’d hear his Chevy pull into our driveway; how my brother, Gregory, and I would race downstairs, throw the door open and leap into his open arms. 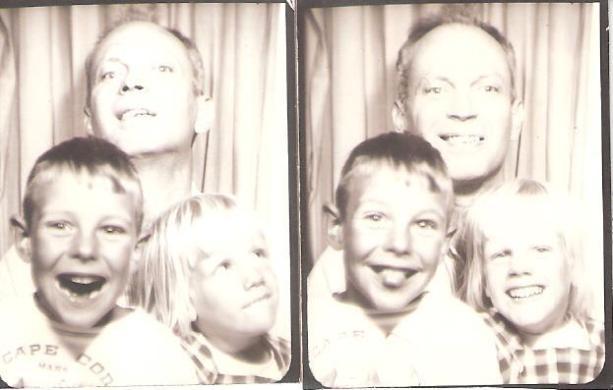 The first stop before the day’s adventure would begin was the Jiffy Mart. Dad would give each of us a tiny brown sack that we’d fill to the brim with an assortment of penny candy―Fireballs, Bazooka gum, Tootsie Rolls, Sweet Tarts and miniature Charleston Chews…(Who knew about sugar hyperactivity then?) No matter, Dad would call it “energy” for our explorations in Forest Park. I loved romping through the thick fallen leaves, inhaling their delicious scent in the crisp air. When I’d get tired, Dad would offer me a piggy back. “One, two, three, upadad”, and he’d lift me up, high above his head and set me on his shoulders. In that instant, my view would change from brown bark to glorious golds and ruby reds. I’d rock back and forth, looking skyward until my neck ached―my butt bouncing on his shoulders, heels tapping his chest.  Sometimes we’d head to the park’s playground.  “One, two, three, push!”, and I’d be soaring, safely tucked in the toddler swing, my feet waving at the tree tops. Sometimes I’d have to have a “pit stop” in the middle of the forest. Dad would find a sheltered spot, bow down clasp his hands together, and offer me the cradle of his bare arms. To still my squirming, he’d distract me, “Listen, I hear a Lydie-bird.” With my bottom bobbing in the breeze, I’d listen intently for the tell-tale, sing-song bird’s call as I piddled on the blanket of pine needles, leaves and twigs below.

As a teenager in boarding school, I envied the others girls when they ran to the phone to talk to their fathers, received impossibly large flower bouquets, or bragged about the father and daughter “date” they’d  had—a Broadway show in NYC or a trip to see the Comos and meet Pele. I secretly wished my father could be more like theirs. I remember blushing when a girl pointed out the window as my dad pulled up to the dorm in his multicolored (self-repaired rust spots) station wagon, “Is that your dad?”

In college, I looked forward to Dad’s surprise “gifts”. There were $25 checks for my birthday, Valentine’s Day, St. Patrick’s Day, made up holidays and random occasions that he’s commemorate with captions such as “Fall Colors”  and stick figures that danced across the memo line with rakes, shovels or the like.

After college, I moved to California and the animated checks kept coming— $50 now.  I really looked forward to them and it wasn’t just the “gas money” as Dad liked to refer to his contributions (even when I didn’t have a car).  It was Dad’s personal brand of Hallmark that I really treasured; his quirky commentary on daily or cultural happenings―”Fall Here”, “DJ near 10,000”, “Jobs!” (when he landed some part-time gigs after retirement), “Tax time”, “Greg is coming today” Market Up & Down”, “Tons of leaves” etc…. Some of the checks had not so subtle hints as to what to do with the proceeds― “Roth it”.  Dad didn’t write letters much, but I learned about his activities by reading his checks and asking follow –up questions when I called him on Sunday nights. (He finally got a phone the summer I lived with him, the year I left for California.) Once I sent Dad a couple of poems I’d written about him, one of which won an award in a little contest.  The following week, I received a check with the memo “Poems”.

One September afternoon, over a decade after I had moved from the East Coast, I received a package from my father. It was flat & shaped like a 33 record album. I turned it over in wonder—a package from Dad? Meticulously and copiously sealed with duct tape, this had to be some kind of special cargo. It took me a while to carefully cut the tape down the line with my little scissors.  Finally, I finished with one side and opened it like a book. On top of a perfectly cut square piece of newspaper was a check for $50 – the memo read “Homegrown Leaves”. I lifted the newspaper and found a huge maple leaf glowing gold and red.  Under that, there was another perfectly cut square of newspaper and another leaf, and so on until I had a bouquet of a dozen maple leaves in my lap. It wasn’t Sunday, but I called him anyway. Dad said in his quite voice, “They weren’t supposed to make you cry.”

When my father passed away a couple of years ago, I put one of the twelve leaves in his coffin with him. I still have the rest of them.